The Equality Courts were created by the Promotion of Equality and Prevention of Unfair Discrimination Act, which was promulgated as a direct result of section 9, read with item 23(1) of Schedule 6, of the Constitution of the Republic of South Africa. The Act designates all Magistrate’s Courts and High Courts as Equality Courts for their area of jurisdiction.

Neither the State nor any person may unfairly discriminate against any person [Act 6]. Is considered a discrimination any act or omission – including a policy, law, rule, practice, condition or situation – which directly or indirectly imposes burdens, obligations or disadvantage on – or withholds benefits, opportunities or advantages from – any person:

A person wishing to institute proceedings must notify the clerk of the equality court of his or her intention to do so [Act 20(2)] by means of the prescribed form [Reg. 6(1)]. The Equality clerk will then notify the respondent within 7 days, who, in turn, has 10 days to reply. The Presiding Officer has 7 days to decide whether the matter is to be heard at the Equality court or referred to an alternative forum. If the Presiding Officer decides to hear the matter, two hearings will take place. The first is the Directions Hearing, at which all parties will be present. The second is Hearing on the Merits to make a decision on the facts presented by the parties. 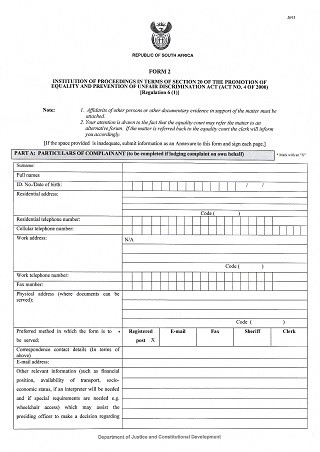 Equality Courts have the power to make an interim order, a declaratory order, an order making a settlement between the parties to the proceedings an order of court,  an order for the payment of damages, an order restraining unfair discriminatory practices or directing that specific steps be taken to stop the unfair discrimination, an order to make specific opportunities and privileges unfairly denied available to the complainant, an order for the implementation of special measures to address the unfair discrimination, an order that an unconditional apology be made, an order requiring the respondent to undergo an audit of specific policies or practices as determined by the court, an order of costs against any party to the proceedings or an order to comply with any provision of the Act.

“The state may not unfairly discriminate directly or indirectly against anyone on one or more grounds, including race, gender, sex, pregnancy, marital status, ethnic or social origin, colour, sexual orientation, age, disability, religion, conscience, belief, culture, language and birth”.

Section 9(3) of the Constitution of South Africa

Equality Courts are specialist court established within the existing court structures and are granted specific jurisdiction to hear complaints grounded in the Equality Act. Their review jurisdiction is limited to instances where the administrative action complained of is founded on unfair discrimination.

Bill of Rights, 10: Everyone has inherent dignity and the right to have their dignity respected and protected.